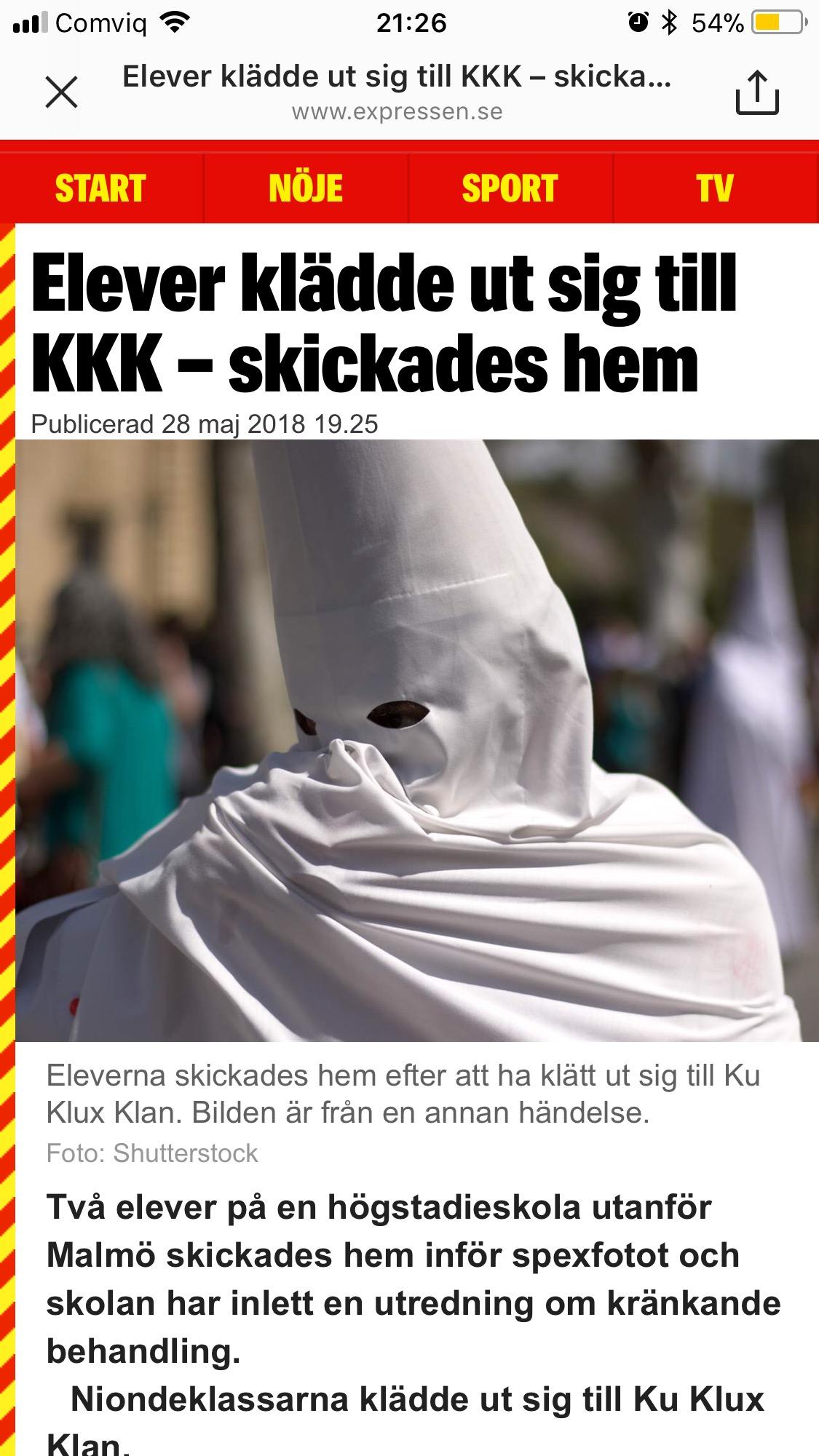 Background: In Lomma Sweden a few children at highschool decided yet again that it would be fun to dress up as the KKK in their idea of fun. The video was also shared and posted on Snapchat a public forum as was the news article in which one of the kids involved wrote the caption HAHAHAH. The video and the captions can be seen below: 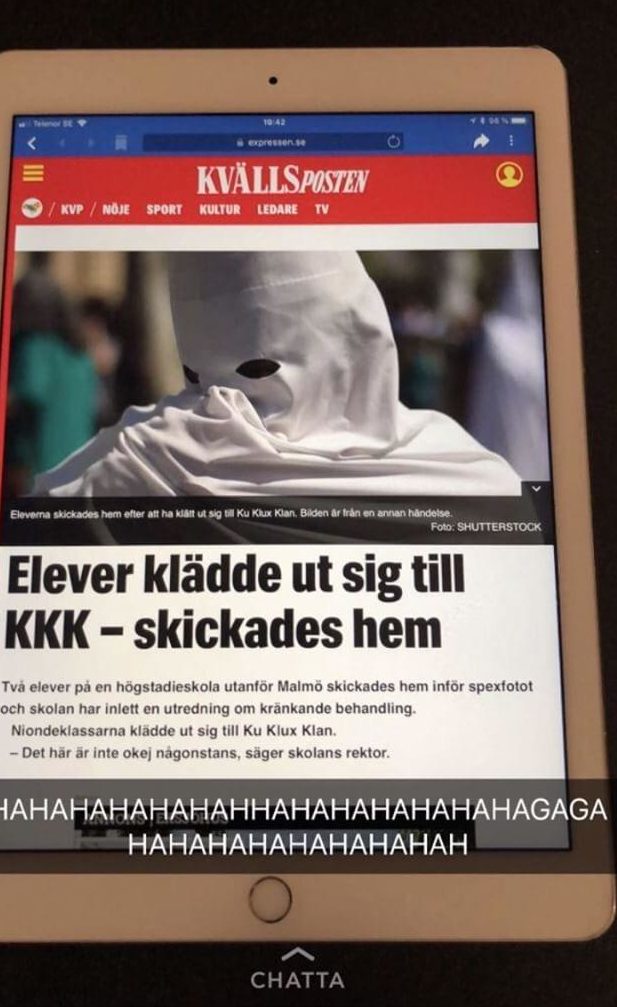 the same youth contacted me to discuss what had happened and explained that whilst he was not involved he also did not do anything to inform his friends that were dressed as the KKK. Excerpts of our conversation can be found below:

Translation: I am not laughing at being expelled if that is what you mean. Although i see no reason for you to hang out my name publicly. People are only turning to me to threathen me and my family stating they will beat the shit out of teh two people that dressed as the KKK. But all I can do is apologise for my part in all of it.

Sidenote: The person’s name was not shared by me, this video was shared by youths that go to the school and has been circulating online and in the newspapers before it reached me. I find it very funny how people prefer to point me out as the scapegoat though even though it doesn’t work that way. 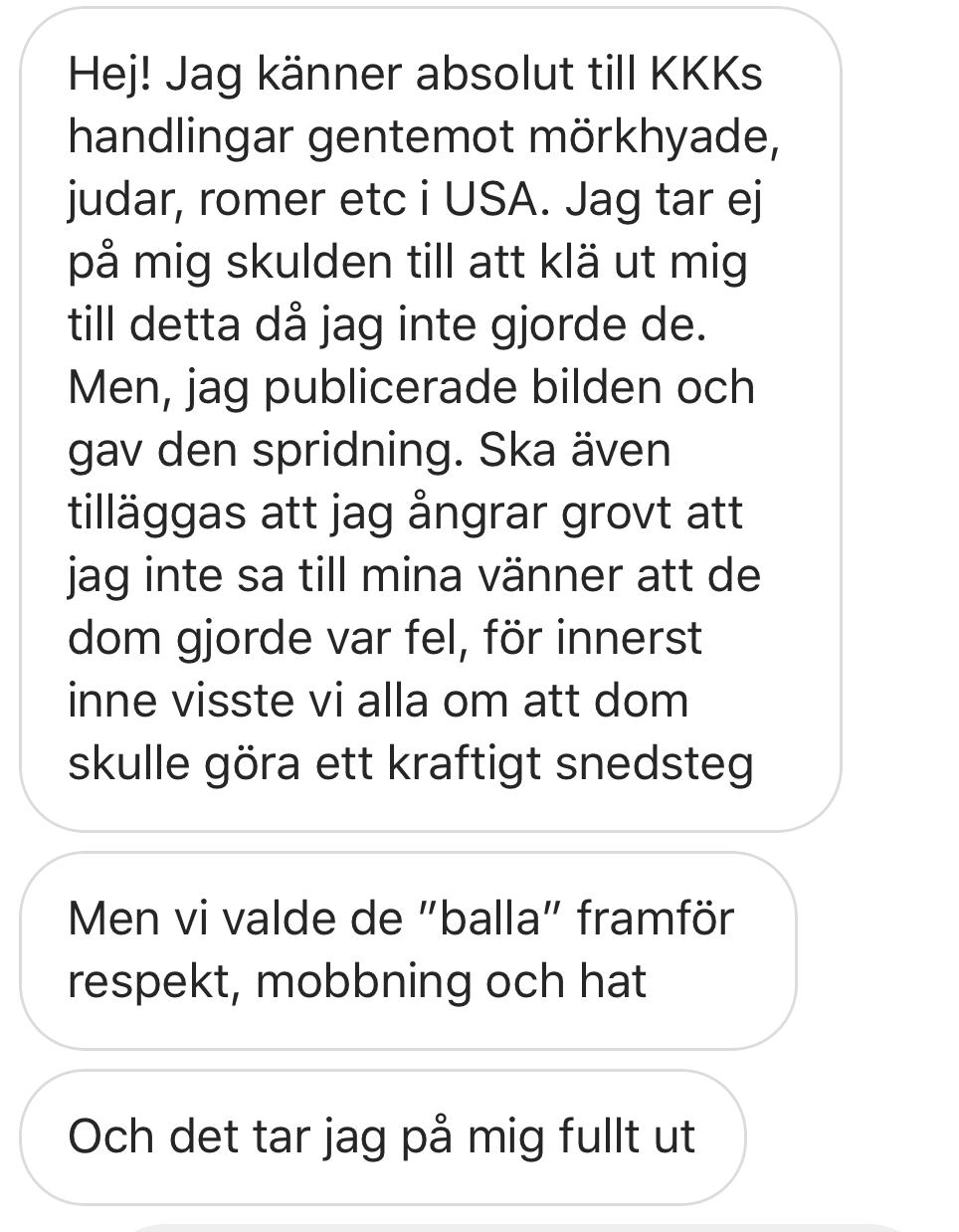 Translation: Hi, I do absolutely know about what KKK did towards blacks, jews, people of Romanian descent in the USA. I will not take responsibility of dressing up as the KKK because i did not my ftiends did. BUt i take responsibility for spreading the video. I also want to add that i regret deeply that i didnt tell my friends that what they were doing was wrong, because deep down we all knew that this would be a big mistake. But we chose to be “cool” before respect, bullying and hatred and for that i take my full responsibility.

My conclusion is thus:

This is not an isolated incident. The school taking responsibility whilst great does not change the fact that these kids found it imperative in their daily lives leading up to this incident to dress up as the KKK and not only film it but also subject their fellow black classmates and schoolmates to the jarring memory of the KKK. Who not only murdered but still murder blacks and white activists who stand for basic human rights. I will be posting a little but about the KKK in the coming days but for now i wish to maintain focus on its relevance to Sweden.

I have had black gatekeepers and ignorant youths commenting that Sweden does not have the same history of KKK hence it shouldn’t be an issue. To that I reply…Sweden has its own severe sets of crimes against people of colour and blacks. Blacks account for the highest rates of hate-crimes in Sweden that rarely lead to courts and prosecution. Considering we are barely 300 000 black swedes that figure released by BRÅ is highly alarming. For anyone that excuses this behaviour, you must be in a privileged position to not care.

We are responsible for educating our children, when our friends partake in harmful practices its our job to say no, to educate them if we now know better and also walk away. Not the opposite which happened here where we film and share it with the world despite knowing better.